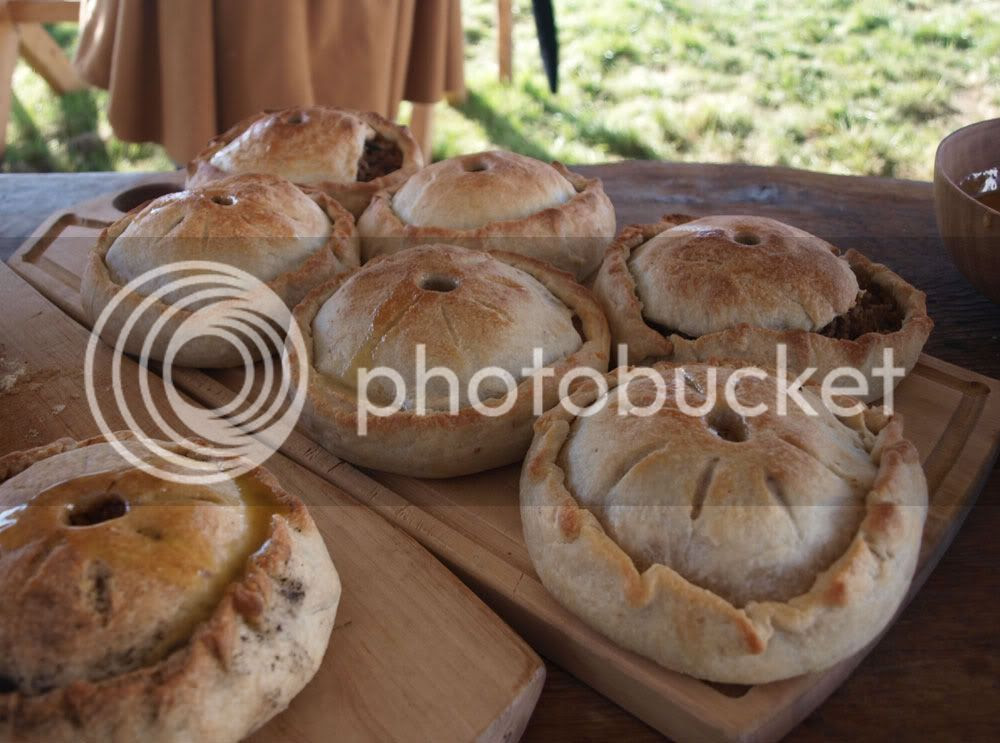 During this last week the authors of Haandkraft were all camped at Spøttrup castle in Salling, Denmark. We had a wonderful week, and got some time to try out a lot of stuff. One thing being cooking some medieval food.
Of course there is no such thing as a truly authentic medieval dinner, but we made some food inspired by sources from the period.

The course that got the best response were the pies, wich I will describe here.
It won't be a specific recipe, as I don't have one. but I will give some pointers in what direction to go. 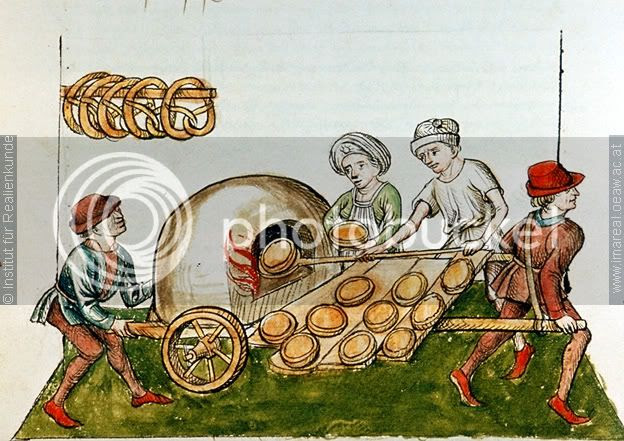 To make pies you first need to make some dough. In this instance we made a so-called "Hot water-crust pastery"-dough, wich is mainly made from flour, water/milk and lard.

The water/milk is brought to boil in at pot. When the lard is all molted the liquid is poured into the flour and mixed with a spoon.
After this you should knead the dough until it is uniform and without lumps.
Leave the dough to cool for a while. The cooler the dough the easier it will be to work with. Room temperature should be fine.

We made two different types of filling. One with chicken and one with minced pork and beef. 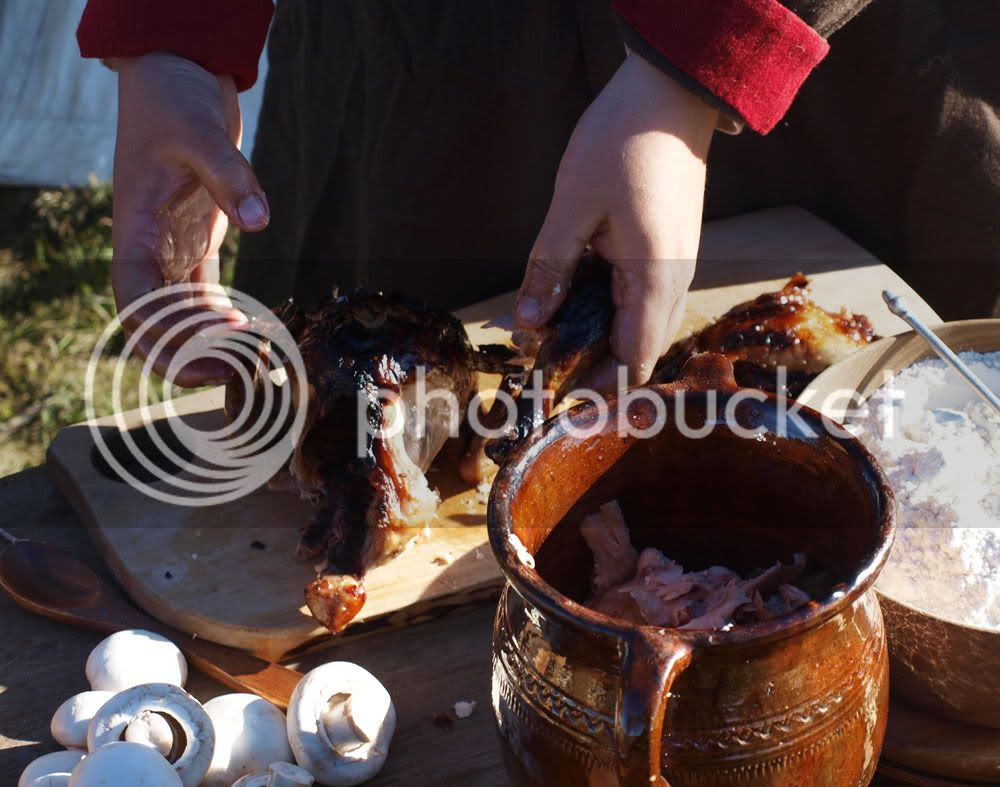 Chicken filling:
Pluck the meat of one cooked chicken and roast it in butter, with some garlick, fresh ginger, thyme and cinamon. Season with salt, pepper, sugar and vinegar.

Shaping the pies:
We shaped the pies using a small wooden bowl (ca. 15cm in diameter). First make a flat piece of dough about 5mm thick. Push it down into the bowl so that the edge go over the edge of the bowl, and place some filling in it. 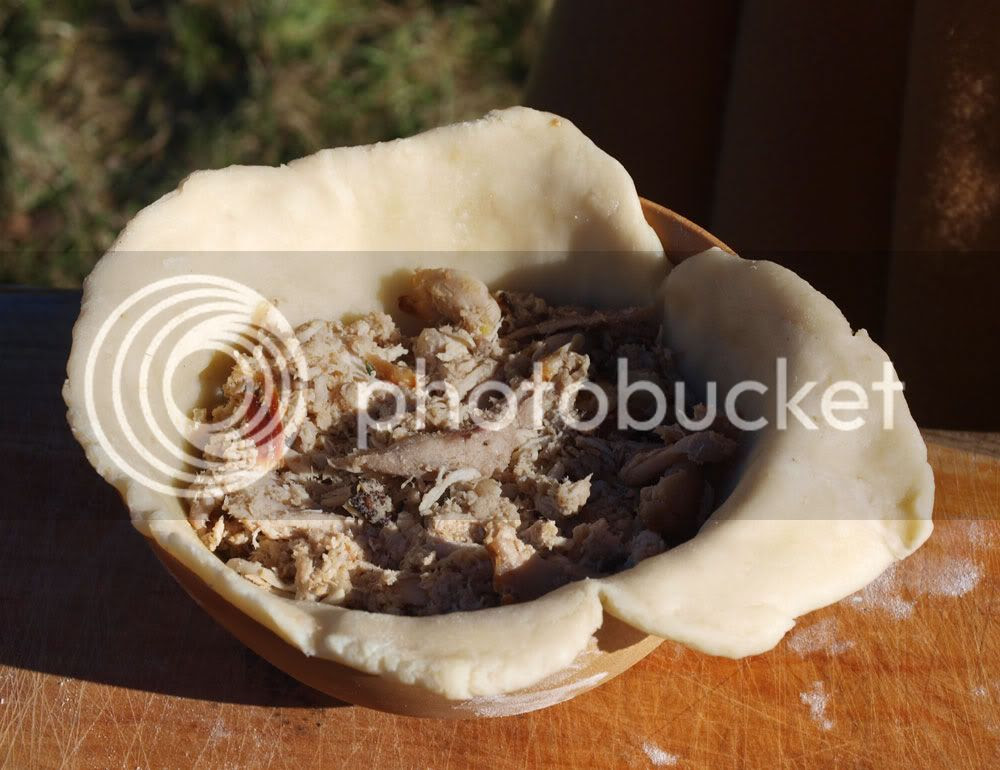 Then make a small disc to cover the filling, and cut the edges flush with the edge of the bowl. 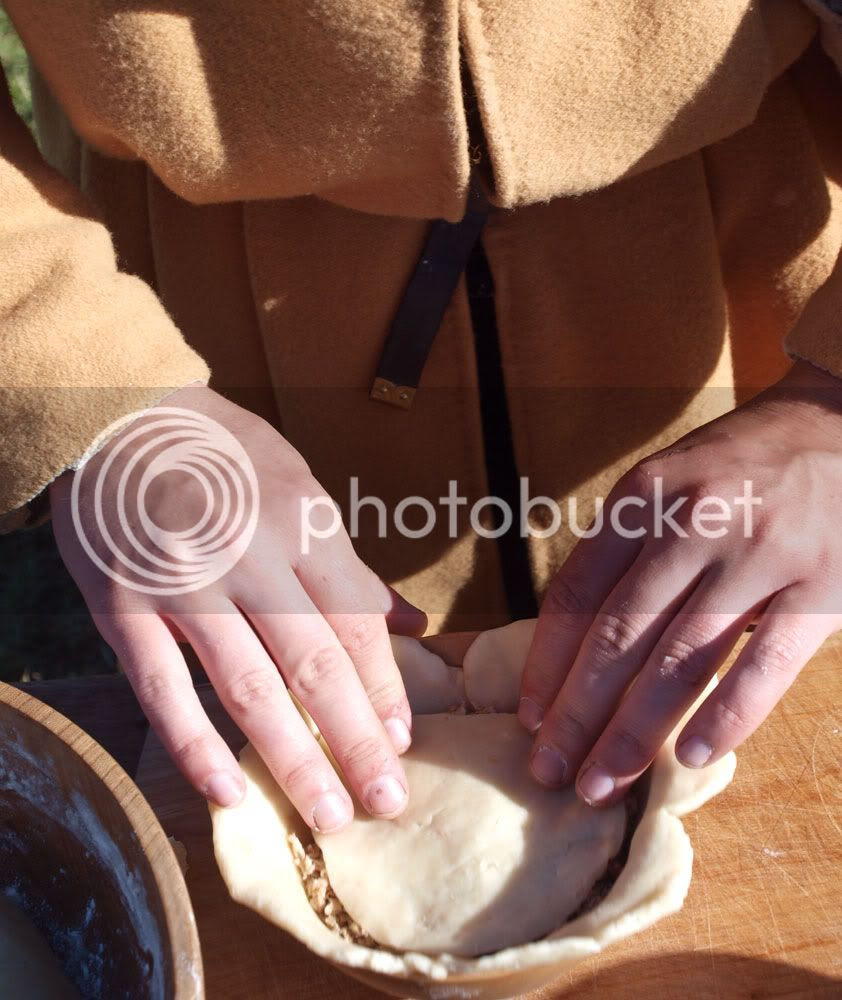 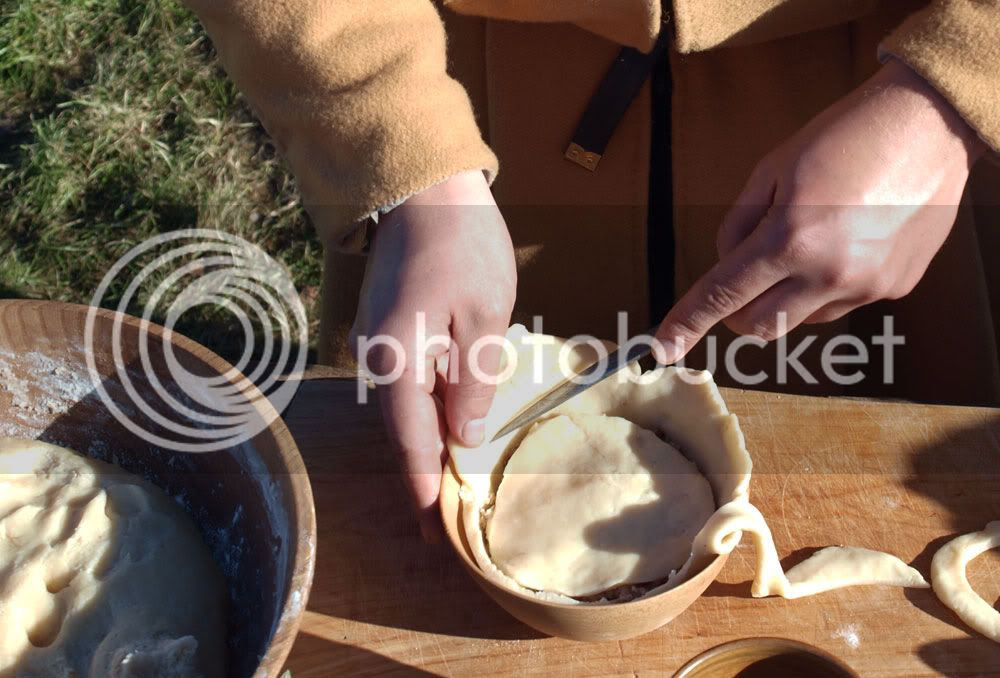 Fold down the edge, and make sure the folds stick in place. If you don't the pie will come open when you bake it. You could probably glue it with egg or water, to make sure it stays in place. 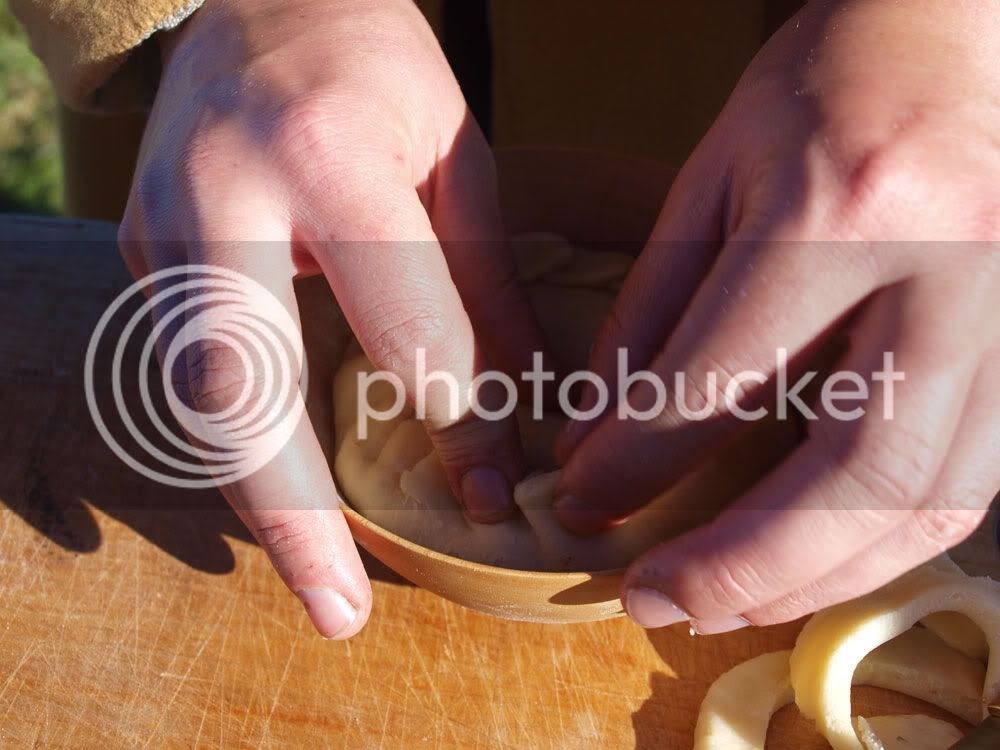 Tip the pie out of the bowl, and poke a small hile in the top.
After the pie has been baked you can pour different kinds of sauces into the hole or seal it with lard or butter. 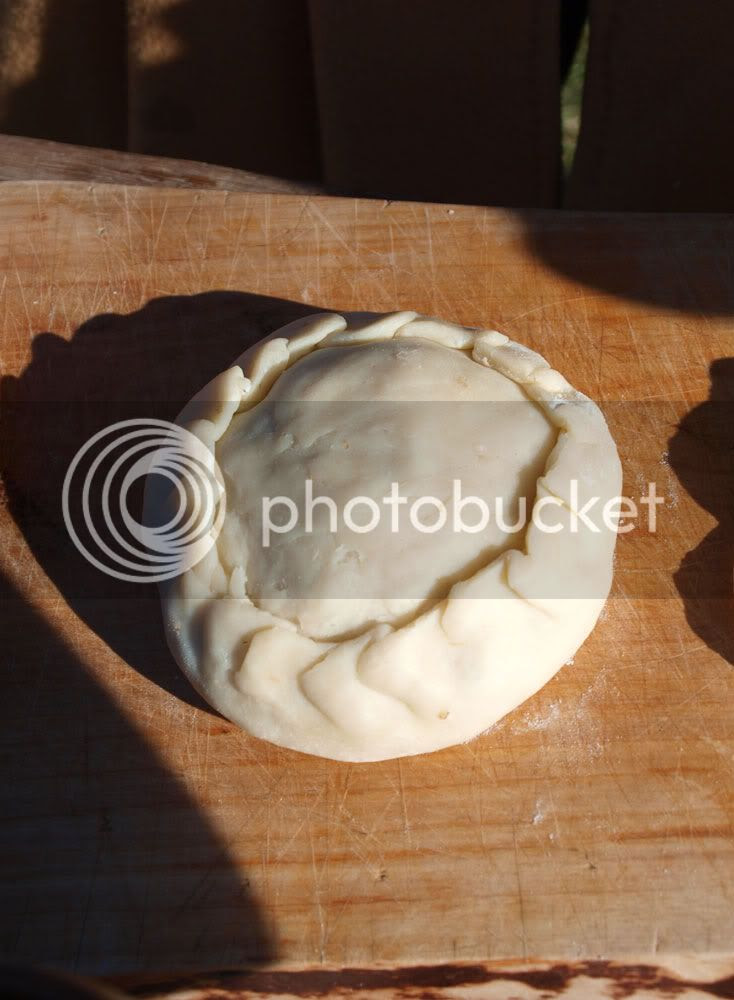 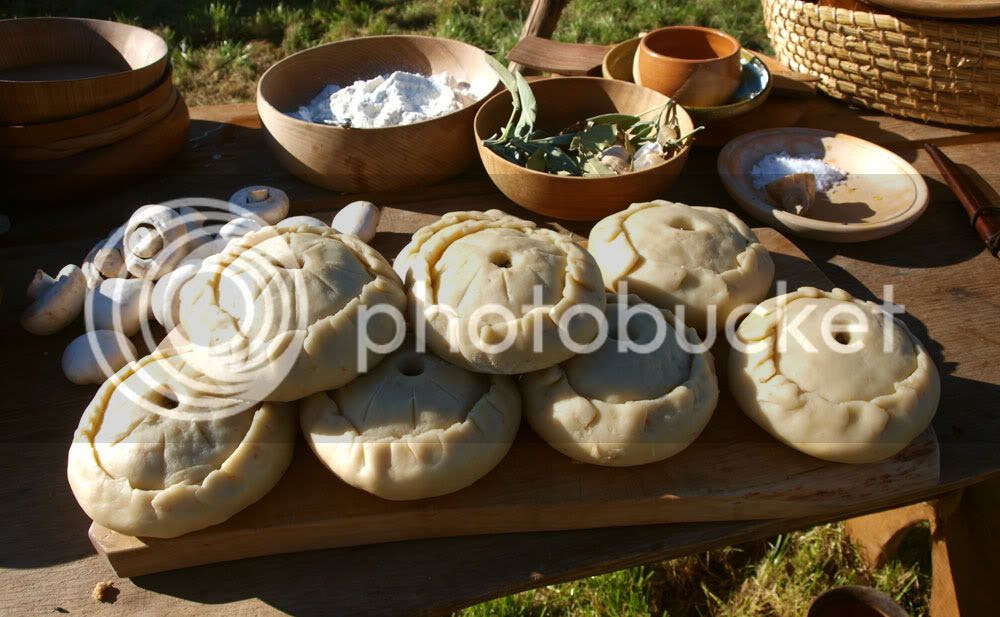 Bake the pies in the oven until thay are golden brown. In a normal oven that will be somewhere around 30 minutes at 200 degrees (celsius). 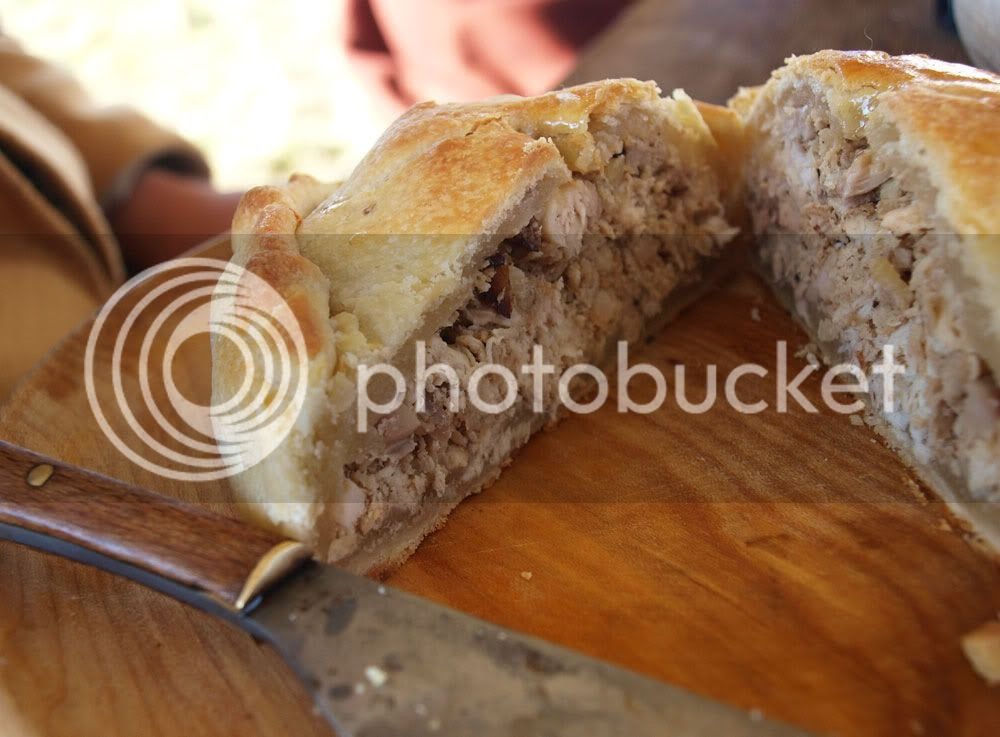